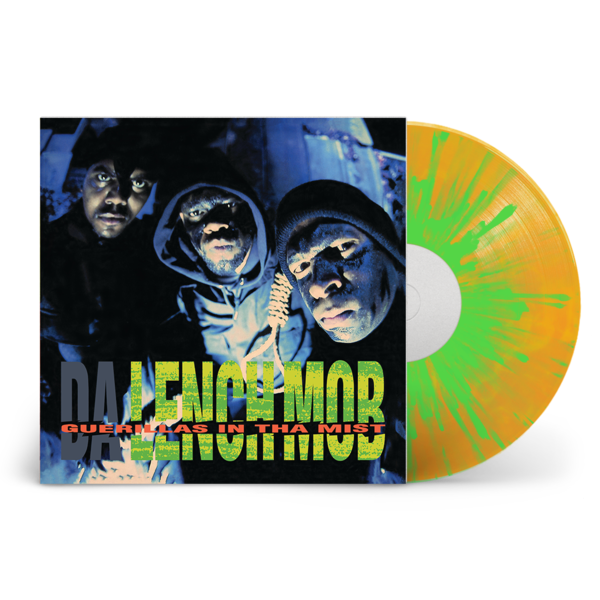 Product code
GET52736CLP
Format
Vinyl LP
Label
Get On Down

Possessing lyrics heavily focused on political and social justice, inspired heavily by West Coast gang culture and Islam, Da Lench Mob made waves throughout the hip-hop scene when they first appeared on the track "Rolling With Da Lench Mob", off Ice Cube's famed 1990 solo record AmeriKKKa's Most Wanted. Initially, the titular "Lench Mob" of the track namesake referred to Ice Cube as well as the other participating rappers, but J-Dee, Shorty, and T-Bone would adopt the name for their own in time. Their standout appearance on the Ice Cube track would earn the trio critical interest, (as well as shout-outs on Ice Cube's 1991 follow-up Death Certificate) and generate palpable anticipation for a studio album of their own. Guerillas In Tha Mist, their 1992 debut record, was recorded in the wake of the Rodney King riots, taking its name from infamous comments made during the riots.

The record was uncompromising and confrontational in its depictions of urban decay and an unjust system wreaking havoc on an economically disadvantaged Black population. It was starkly realistic (bordering on abrasive) in the content of tracks like the armed revolution-advocating "Freedom Got An A.K.", the kill-your-idols style of "You And Your Heroes", and the anti-pusher anthem "All On My Nut Sac." These harsh manifestos were made all the more smooth via Ice Cube's jazzy G-funk and Bomb Squad-influenced production, which sampled heavily from classic songs by Parliament, Kool & The Gang, The Incredible Bongo Band, and even Vangelis. Cube himself would make guest appearances throughout the record, as well as an appearance by B-Real of Cypress Hill on the track "Ain't Got No Class." Guerillas In Tha Mist was a Billboard success upon its release, reaching #24 on the Billboard 200, and rendering rap radio hits out of its title track and "Freedom Got An A.K.", but Da Lench Mob would fall into obscurity over the years, eventually going their separate ways after creative differences, financial rifts, and the life conviction of rapper J-Dee for suspected murder in 1993.

Despite their loss of commercial fortunes, Guerillas In Tha Mist would develop a strong reputation as an unheralded gem among hip-hop heads, and would be considered one of the great lesser-known releases of the era among critics (in 2018 Complex would declare the title track as one of the 100 Best L.A. Rap Songs). Decades after its initial release, and in tribute to the memory of Da Lench Mob member Shorty, who passed in 2019, Get On Down now presents an exclusive LP reissue of Guerillas In Tha Mist, which previously was only released officially on wax in Europe. The LP is pressed on a deluxe Green and Orange Splatter-colored vinyl, and features remastered audio and a painstakingly recreated full color jacket.