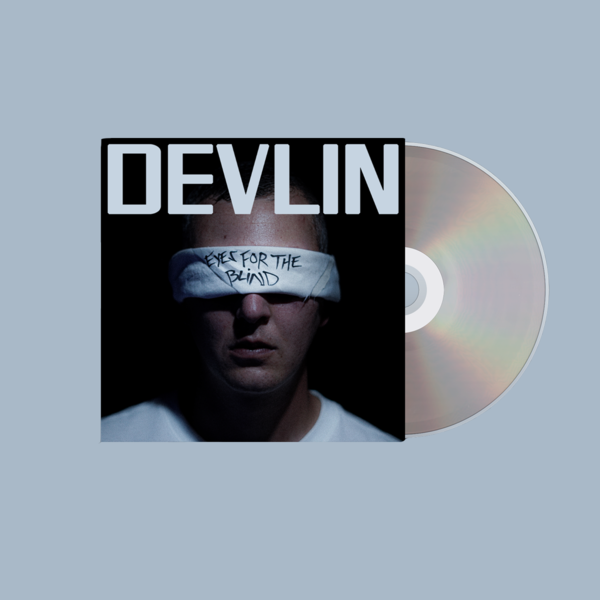 Eyes For The Blind: CD

A true UK original returns to the soundsphere, as rap icon Devlin unleashes his highly anticipated project Eyes For The Blind – a timeless body of sound displaying issues in modern society, shadowed by ignorance and misguidance.

After dropping a plethora of singles in 2021 including a chilling MIXTAPE MADNESS feature, the London-based rapper shifts his vision onto 2022 with his full-length piece Eyes For The Blind — an album bursting with raw musicality and instinctive real rap lyricism backed by a cut-throat message about the downfalls of street life. Illustrating the euphoric feeling of breaking down confinements in society and truly living for the now. Infectious instrumentals lay perfect bedding for Devlin’s classic storytelling bars.

Speaking on the new release, Devlin states - "I think this album for me was about escaping everything that's going on in the world at the minute, all the division, identity politics, COVID, lockdowns. For that reason, I just wanted to be free mentally, be creative and feel positive about something”.

The 14-track project experiments with many sounds influenced by its lyrics and subliminal messages. Tracks like “Air I Breath” ft Orlean and “All We Have Is Now” highlight road life and how the youth of society could be wasting their full potential - through soulful layered vocals and intoxicating rhyme schemes that create a cathartic energy release. The track “Home” enlists one of the hottest artists of 2021 in Potter Payper. Known for his unmatched lyrical aptitude and street storytelling, Payper adds a breath of fresh air as the two trade bars behind a bouncing bassline and synthetic piano riffs. The whole LP takes many shades and forms while Devlin’s hard-hitting bars and devilish flows stay at a maximum, displaying why he’s considered one of the very best MC’s to grace the UK scene.

From rapping on Pirate Radio at age 13 to collaborating with some of the biggest artists in the UK including Ed Sheeran, Skepta, Wretch 32 and JME – Devlin has acquired a fluent ability to create smash hits and has crafted an astounding discography over the last 16 years. Most notably his acclaimed debut project “Bud, Sweat and Beers”, reaching 21st in the UK Album Charts and placing him in the prestigious BBC Sounds of 2010.

In over a decade of music-making, Devlin is still at the top of his game. His consistent dominance has fuelled him to create timeless tracks that sing out across all generations. With continuous support from the likes of THE GUARDIAN, THE INDEPENDENT and NME to name a few, we anticipate another landmark release for the legendary MC.