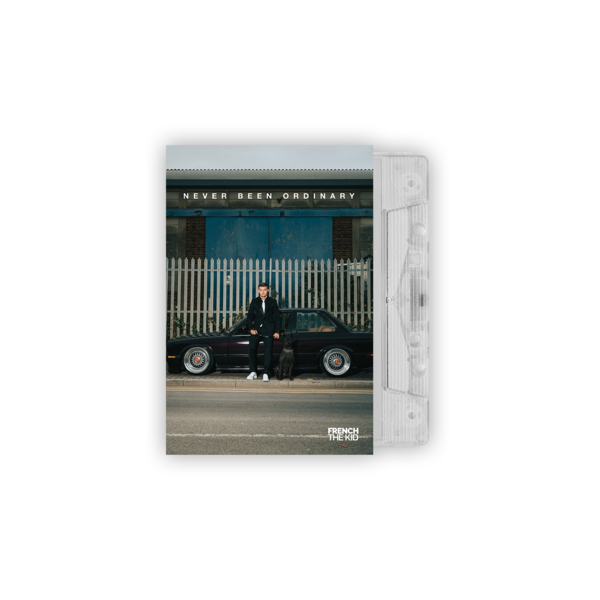 French The Kid will release his debut mixtape Never Been Ordinary out 1st April 2022 via Drop Out UK.

Laid over 13 tracks, this hard-hitting debut is an unapologetic statement of exactly who French The Kid is as an artist. Meeting his raw, evocative storytelling with beats from an eclectic range of emerging producers - the likes of Lovelife (‘Thrill’, ‘Can't Feel My Face’, ‘Make It Out’), Joey4k (‘Neverland’) and Tanz (‘Window Blues’) - Never Been Ordinary is a confident statement of intent from the most exciting rapper emerging in the UK.

From ardent piano-driven opener ‘Mercy’ to the melodic ‘Don’t Feel The Same’ the project sees the bilingual rapper seamlessly move between bars in French and English. With lyrics spanning mental health struggles, feelings of isolation, ruminations on drugs and drinking, to the harsh realities of life on London’s streets, it’s a project seeped in honesty and authenticity.

Moving title track ‘Conversations/Never Been Ordinary’ sees French unleash an inner dialogue on his relationship with alcohol, with his fans and his mental health inspired by Eminem’s iconic ‘Stan’. Fiery, piano-driven new single ‘Make It Out’ speaks of the duality of his new found success and the tribulations of life on the strip. The new single arrives today with a lo-fi visual from director Teeezy that moves between dizzying shots in cars with his friends, standing on high rises and tense late-night arguments with his girl.

The mixtape features the haunting, siren-like recent release ‘Remedy’ which saw support from the likes of Complex UK, Independent and is currently on the 1Xtra B List. ‘Remedy’ is joined on the project by the powerful previous releases ‘Thrill’, the eerie, intense ‘Uptown’ and the hard hitting ‘Can’t Feel My Face’.

From icy, melodic drill and straight-talking UK rap through to global records infused with French’s eclectic influences ranging from the French rappers he grew up with to the US hip hop names of the early 00’s, Never Been Ordinary brings these strands together in a truly ground-breaking showcase of this multifaceted talent.

Just 22 years old, French spent his teens in South West France before returning to the UK at 18 to take the music industry by storm. Since smashing onto the scene with his debut single just 2 years ago, French The Kid has amassed a cult following, millions of streams and delivered iconic viral freestyles that have propelled him to prominence (including a GRM Daily ‘Daily Duppy’ which has become one of the most viewed Daily Duppy debuts of all time). An Amazon Music ‘One To Watch’ for 2022; French has had 4 Top 100 singles in the last 12 months, has been playlisted across BBC Radio 1Xtra, Rinse, Reprezent and Kiss Fresh, has fans including Clara Amfo, Adele Roberts, Jack Saunders, Kenny Allstar, Reece Parkinson, DJ Target, Robert Bruce, Dotty, Charlie Sloth & Rebecca Judd and has been championed by the likes of CLASH, Complex UK, Independent, GRM Daily, Mixtape Madness and more.